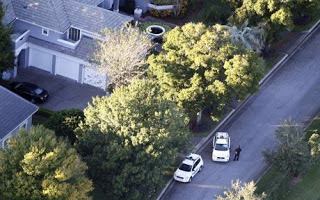 I was over this story the moment I first heard about it Friday morning. Yes, I am aware that I am nonethless blogging about it. It is not my fault. My hand has been forced by the nonstop chatter of media personalities, including one hyperbolic CNN correspondent who referred to the golfing great as “the most recognizable face in the world…maybe ever.” I have a feeling Elvis, the Beatles, Michael Jackson and Madonna (not to mention Gandhi, Churchill and Hitler) would beg to differ. The man has a minor fender bender and the world stops. Blame it on a slow news cycle I guess. Last year at this time, we were on the edge of our seats watching the outcome of the Mumbai terrorist attacks. Now that was news.

So fine, Tiger is rich, famous and talented, so any story about him is bound to get some play. But what never ceases to amaze me about celebrities is that they whine about unwanted media attention, whilst fanning the flames of curious fury themselves.

Case in point: Woods postponed the requisite police interview for the third day in a row. Whatcha hiding Tiger? A DUI? A domestic dispute gone horribly awry? If so, you wouldn’t be the first, so out with it already. If any of us plebians refused to speak to the Federales after wrecking our vehicles, we’d have some time in lock up to think about it.

Call me cynical, but if ever there was a blood alcohol level issue, it is far too late to determine it now. Meanwhile Mr. and Mrs. Woods have had leisurely days to get their respective stories straight. Conventional wisdom tells me Tiger Boy had one too many, got lippy with his wife, and tried to peel out of his driveway on Thanksgiving night, muttering something about, “showing them all.” Fine, it happens to the best of us.

If you want the story to die, own up, tell the 5-0 the truth. Take a page out of the book of President Barack Obama, who when asked on the campaign trail if he had ever smoked dope and inhaled, famously replied, “I thought that was the point.” Have you heard a thing about it since?