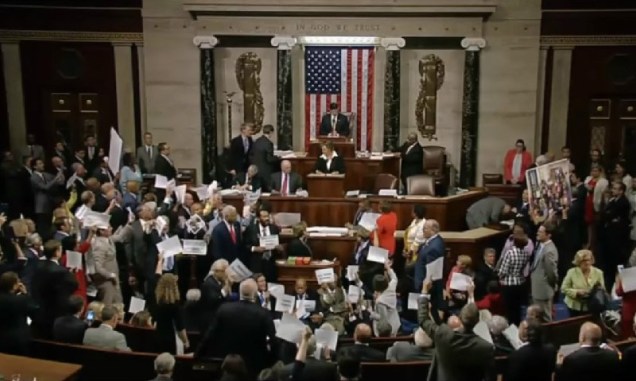 “Nothing has changed. Except the year. And maybe, just maybe, the approach of our journalistic and elected advocates.

This is not 2004, when the last assault weapons ban lapsed and a struggling, incumbent President George W. Bush floated a Constitutional amendment banning gay marriage with much success. Instead, it’s 2016, one year since marriage equality became the law of the land. And now it’s the year that the Democratic House Caucus, muted since the 2010 midterm election “shellacking,” finally stood up to the disingenuous Ryan agenda that makes the majority of us less secure by every measure. Georgia Representative John Lewis, a Civil Rights legend, reminded the nation this week that fulfilling civic duty with courage doesn’t have to be a lost art. Under the threat of much panicked, procedural bullshit intended to silence his voice, Lewis spoke to the chamber on behalf of a weary nation.”

Sorry. I’ll try to be less childishly enthusiastic about “The SpongeBob Musical” for the sake of a literate review of the latest Broadway in Chicago production. But it’s going to be a challenge. The Pre-Broadway World Premiere of this take on the wildly popular cartoon series that began in 1999 is exuberant perfection. It’s nigh-impossible not to sacrifice one’s reserve (willingly) to the overwhelming joy that is every creative, technical and performance element of this show.

The plot, though it would hardly seem to matter given the source material’s colorful, loud reputation, is surprisingly and disarmingly approachable for all ages and cynicism levels. Press materials describe it as follows:

“SpongeBob and all of Bikini Bottom face the total annihilation of their undersea world… And just when all hope seems lost, a most unexpected hero rises up and takes center stage.”

A difficult narrative terrain is successfully traversed by Book writer Kyle Jarrow. The trick is to make the show feel like episodus interruptus for die hard “SpongeBob Squarepants” fans (such as ahem, myself — at least during the late undergrad years). At the same time, the production must be welcoming for newcomers to the 16-year cultural staple. My companion for the evening, a complete stranger to the Squarepants, watched a whole six minutes of the cartoon prior to last weekend’s press opening. By the performance’s regrettable curtain fall, we were equally besotted.

How can this be avoided? The music itself is terrific — diverse, radio-friendly and energetic. And with songwriters on the team such as The Flaming Lips, John Legend, Cyndi Lauper and T.I., this makes total sense. And yet it should not be taken for granted. I know “Hamilton” tickets went on sale this week in Chicago and the city has lost its relative theatrical mind over it. But “The SpongeBob Musical” deserves to be widely heard and seen. Such quality shall not be lost in the shuffle.

The production also comes with amazing audio/visual work, a set that literally has to be seen to be believed, costumes of which childhood (and adult) dreams are made and goodness me, the performances.

It almost seems unfair to single any one talent out for praise. These people are all-stars and coordinated with magnetic dexterity by show Co-Conceiver/Director Tina Landau. Landau, a Steppenwolf Theatre Company legend, is more than ready for Broadway. Perhaps it is she more than anyone who deserves the raucous and roaring applause the show will continue generating.

But despite what I just said, it’s incumbent upon my role as critic to heap kudos upon key performers. All are without exception terrific, yet Gavin Lee, as submerged Eeyore figure Squidward Tentacles, nearly walks off with the production. That man can dance like an angel with four feet. It’s hard enough for mortals with just two. I won’t say more because a continuous stream of delightful surprises is part of the magic. Just one more tease: Squidward’s big number is a show stopper.

And Ethan Slater, as the cartoon’s titular, kind-hearted and earnest if dizzy character, is everything. I mean literally everything: an acrobat, a man of a thousand voices, a break dancer, an amazing vocal talent and deft comedian. This 2014 Vassar graduate is about to break big — and deserves every bit of what promises to be a long career on the Great White Way.

“The SpongeBob Musical” is all superlatives and offers a genuinely inspirational message along with top-tier entertainment. The weary of spirit are especially recommended to buy their tickets before this refreshing, unexpected jolt of fabulousness departs the Windy City.

“The SpongeBob Musical” runs through July 10 at the Oriental Theatre, 24 W Randolph Street, Chicago, IL. For information or tickets, call 800-775-2000 or visit the Broadway in Chicago website.

“There can be no discussion of mass murder without touching the nation’s foolhardy obsession with weapons of war. The Pulse assailant (and again I won’t print his name) was in possession of LEGALLY obtained assault weapons. Absurdly, they are easier to buy than birth control pills and many varieties of cold medicine. And we wonder how we keep finding ourselves here. There are those (with great strain, I’m trying to avoid name calling) that say “a madman will find a way to kill.” Perhaps. But with a knife, would this guy have been able to quickly execute and injure over a hundred people? Not a chance in hell.

This piece may sound like I’m advocating for a universal nightclub lockdown. I am. If the nation’s gun laws are unchangeable (and there’s no reason to think otherwise), then it is unfairly incumbent on us to do so. The fear I felt as I skirted past Bourbon Street jazz clubs last night was real and tragic. And where appeals to emotional humanity and morality have failed to stir the gun lobby and its Washington flunkies, perhaps we can send an economic message: “We won’t go where we can be shot. Fix this now.”

I sat watching Hillary Clinton’s speech at the Navy Ship Yard in New York on Tuesday night with tears streaming. As a 37 year-old woman who’s followed the career of the former First Lady, Senator and Secretary of State since junior high, #ImWithHer completely. I may have voted for Sanders in the primary (that makes two election cycles in a row with a plurality of quality Democratic options), but come on. To quote another of my political heroes, Vice President Joseph R. Biden III, Clinton’s status as the 2016 presumptive nominee is a “big fucking deal.” This is the first woman EVER to go atop a national ticket. I’m nowhere near as high-profile as Mrs. Clinton but as a career woman and ardent feminist, I know her journey has been filled with roadblocks. She’s not in the Oval Office yet (bring it Trump) but she’s done something historically important. It warranted an emotional release.

Toward the end of Clinton’s soaring address to supporters, I began crying a lot harder. Because I knew someone who would have hated everything about Hillary’s victory, a friend with whom I would have had a spirited debate about moving on from #FeelTheBern to unite the party. Because Trump is the alternative for crying out loud, and though Clinton is an imperfect candidate (as they all are), she’s a proven, pragmatic worker who genuinely cares about the country. He would counter with “Clinton is an evil crook” rhetoric and declare his support for Jill Stein. I would spit the names of Nixon and Dubya. “Misogyny” would be interlaced throughout as both accusation and social commentary. He’d insist anarchy is preferable to another machine leader. We’d probably go a few days without speaking before sheepishly picking up the phone or sending a text.

That’s what should have happened after Clinton’s landmark speech. But Todd died on Memorial Day, six days before I sat on my couch cheering Hillary, paradoxically wishing for the wet blanket he would have enthusiastically offered.

We met on the Union Pacific North Line Metra route in 2010, commuting to the same downtown Chicago office (although not explicit colleagues). I was barreling toward the end of a troubled marriage and near-permanently distracted. As I’ve explained to Bob in recent days, Todd did the initial work and though I’m eternally grateful, I’ll never understand why. Yes we both loved theater, considered ourselves ardent liberals (though he was bitterly disappointed in President Obama – another source of contention) and resided in the same neighborhood. But Todd had roughly a zillion friends as one of the most energetic and likable people in the free world. And me, at least at least then? Pretty much this.

As Todd and I became better acquainted, I learned he’d survived illness, relationship loss and death. Over the course of our six-year friendship, he also recovered from a very serious car accident. Todd didn’t even drive, mind you. He was struck on the sidewalk. Anyone else might have sunk into bitterness at the cruelty of fate. This man had tenacity, spirit and yet counterintuitively, was rather blasé about it. Todd casually and unaggressively knew he was awesome – beaming that certainty at everyone he loved. This made him the best kind of friend – one always there in crisis, with the authenticity to tell when it was time to stop singing the “Big Railroad Blues.”

Todd was a huge Grateful Dead fan and a socially conscious, fun-loving hippie aesthetic infused everything he did. I’ll never know for certain but I think he found my own existential struggles toward inner peace amusing. I’ve made progress but you can’t wash the Type A out of a girl entirely. When my friend felt in need of a red-faced, arm-waving, outside voice volume rant (say, when Mitt Romney made his infamous “47 percent” remarks), he knew where to turn. And though we were temperamentally different, we loved each other symmetrically.

My pal died just a few hours after we enjoyed soft pretzels and cider at a neighborhood German pub. He was feeling great: excited for a boatload of summer plans he’d made, philosophical about a recent breakup and ready for whatever came next (as always). We exchanged affectionate hugs and as we parted, I thought about how glad I was that I was in a place to do more of the emotional work in our friendship. Although Todd carried me over the starting line, over time we walked hand in hand. Once in a while he even did the leaning.

Todd was buried in his home state of New Jersey last weekend. On Saturday June 18, Chicago friends and family will have their chance to gather and celebrate his life. Todd was a super connector, fond of introducing people he loved to one another. As a result, perhaps one of his final gifts, I’m not alone in grief.

But we won’t argue about Hillary Clinton’s candidacy. Ever. And I hate it.

“Fittingly, in a year where Trump is playing human tire fire with one of America’s two established political parties, Ryan’s game with the media has grown more complicated. Now that he’s officially left the #NeverTrump movement, he’s completely beholden to the whims of a candidate who worships no one but himself.

It was never clear to begin with that the Donald gives a shit about Ryan’s awesomely lopsided legislative agenda. And a mere week after his “sudden” endorsement, the Speaker tussled with Trump’s racist, embarrassing feud with U.S. District Judge Gonzalo Curiel. Don’t look now but the con man has been conned.”