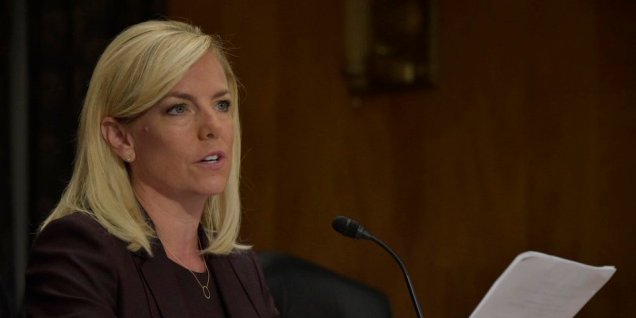 “I get tired of pointing this out to right wing elites, but you can’t have it both ways here. Just as Justice Kennedy impugned Colorado’s ‘clear and impermissible hostility toward the sincere religious beliefs that motivated [the baker’s] objection,’ we’re not aware of the spiritual leanings of The Red Hen’s ownership. Most faiths, including all those across the Christian spectrum, teach empathy and humility toward the endangered and less fortunate. In fact it’s right there on the Compassion website:

The Good Book has been literally thrown into a cage along with thousands of helpless migrant children. That’s what Evangelical and Christian cynicism looks like in 2018. Perhaps the proprietors of The Red Hen have a conscious moral objection to serving accessories to kidnapping in their establishment. That is now protected by the First Amendment under the SCOTUS ruling. Be careful what you spend three decades fighting for, conservative Snowflakes. The law, at least for now, is still applicable on all sides.”

“To explore these questions, Kaufman and the Tectonic Theater Project made a series of visits to Laramie to conduct an extensive series of interviews with residents of the shaken town. It is to the writers’ collective credit that a tapestry of perspectives is recorded and shared. There are those who empathize with Matthew and his grieving family but dodge behind scripture and small-town convention to victim shame Shepard, avoiding an actual reckoning with the unspeakable crime. The murderers, Aaron McKinney and Russell Henderson, are held up by this crowd as aberrations, deviants—like Shepard himself.

But there are other stories, stories of revelation and personal growth. The white, middle-aged male homicide detective who sees Matthew’s broken body, consoles his devastated parents and decides that homophobia is as dangerous and out of place as a loaded canon. The Catholic priest who concludes that he doesn’t need a Bishop’s blessing or the Bible’s permission to organize a candlelight vigil or publicly condemn the student’s killers. The cautious lesbian academic who becomes more doggedly determined to live her truth, even at the potential risk of her personal safety.

The voices, vignettes and names onstage rotate frequently, embodied by a chameleon-like cast of 12 talented performers.”

“Almost 10 years into a theater criticism career on the Windy City beat, I experienced a first after the proverbial curtain dropped on Guards at the Taj, the haunting new production from Steppenwolf Theatre Company. Before I could find the way to Halsted Street to catch a ride home with my husband, I needed a few minutes to regroup in the restroom. I’m not talking a couple solitary tears. It was a full-on ugly cry. It’s not often that one encounters a work that makes such an immediate, visceral and I suspect, long-lasting impression on the psyche.

The play by 2010 Pulitzer Prize finalist Rajiv Joseph is so many things at once: a wry comedy, a beautiful story of friendship, a timeless examination of cultural stigmas, the burdens of duty and the limited choices that confront the poor and powerless each day. The work is a brilliant, linguistic joy, as well as incredibly difficult to watch. Neither Joseph nor director (and Steppenwolf ensemble member) Amy Morton allow the audience to retreat from the conflicting tensions baked into this amazing, one-act piece.”

“Bull in a China Shop illuminates the history of real-life academics and lovers Mary Woolley (Kelli Simpkins) and Jeanette Marks (Emjoy Gavino) at an accelerated, yet thoroughly engaging pace. At the turn of the 20th Century and beyond, Woolley the professor and Marks the student go through a series of career and geographical changes, while passionately endeavoring to create a freer and more representative place for women in global society. Tactics and ideology morph in response to current events and individual circumstances, but Wooley and Marks never sacrifice their devotion to one another. The play is a touching, 40-year love story featuring two brilliant academic, feminist minds. A true tonic for the wounds inflicted by toxic male masculinity narratives.

Yet Wooley and Marks are not one-dimensional saints of suffrage. They are complicated and ambitious. They make compromises that are called into public and private question. They are fully and richly human. The tall, stately Simpkins and the diminutive, but powerful Gavino have a gorgeous onstage rapport that communicates the surprising steadfastness of a relationship that began when Marks was but an idolizing teenager.”

Read the full review at The Broadway Blog.