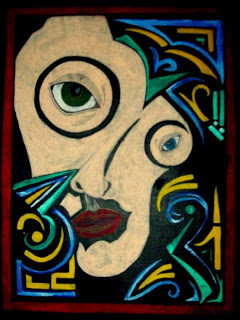 This morning, by way of making conversation as we rode the elevator, my husband told me a story that launched me into guffaws of laughter. This may say a lot about where my head is at 7:45 AM, but this little anecdote struck me as wildly humorous, largely because it was out of left field and took me by surprise.

Eddie relayed that yesterday at the office, he listened in as a co-worker described him to another man with whom he was not acquainted. The description was as follows: “You know, that tall Indian guy with the sideburns.”

Now you may wonder what exactly it was I found so funny about this identification exchange, and it is in the last part, the “sideburns,” that I located the source of my amusement. Eddie is certainly tall, and definitely Indian, but to include sideburns in this delineation seems to suggest he is some sort of Southeast Asian Ron Jeremy. Nothing could be more misleading. While my metrosexual man does indeed keep a neatly trimmed line of hair in front of his ears, it is hardly the stuff of mutton chops.

What made me decide to devote blog space to this slight exchange however, is the clear fact that the office perception of Eddie as a sideburn sporter REALLY bothered him. He was looking in fact for my affirmation that his well-kept coif was not a flashback to the Disco Decade. Of the few features that Eddie is insecure about, it was certain that sideburns never entered into the equation. I could see the wheels turning in his mind. “Am I a hirsute freak show? How could I never have noticed?”

After assuring him that his hair is decidedly 2010, kempt and adorable, I started to wonder about the way people see me. I always assume that the visual representation is that of a wild haired redhead with a big ass, if they notice me at all. But maybe there is something else that grabs the attention, something I barely notice myself.

It is not as though anyone can afford to obsess over the perceptions people have of them, especially during a split second, visual once over. But like it or not, first impressions matter, maybe even more to those being perceived. We like to believe that we can manage the synthesis of our own image inside another’s brain, but like most other things in life, it seems that this too is out of our control. For some reason, confronting this was something of an awakening for me.

People are going to see what they’re going to see, regardless of any control freak attempts on my part to minimize my perceived flaws. Maybe they will be noticed, or maybe it will be something else altogether that makes a mark. In that case, I might as well just relax and be comfortable. It’s amazing how much I have struggled throughout the course of my life to do that.