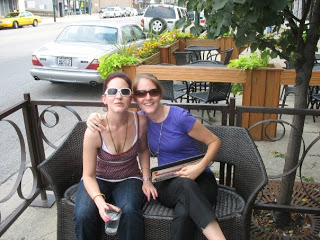 I have my only sibling Jen (photo right) on the brain his morning. Though most of our interaction this week took place over text message (she is team iPhone, myself Team Blackberry), with one phone call thrown in, we had a great week by any measure.

On Tuesday, I helped Jen recover a very important document she thought she’d lost for good, by going to the sent folder of an email account I have had since the dawn of mankind. On Wednesday, we exchanged quick hits about the latest act of parental aggravation. On Thursday, we discussed strategy for dealing with negative personal distraction, and made plans to go a Cubs game Monday night. On Friday, Jen texted her pleasure in hearing the Guns ‘N Roses classic “Paradise City” on the radio, and I told her that song was played out.

Jen is a superhuman suburban mother of two wonderful little girls, who also manages to have a pretty awesome broadcasting career. I am a truly citified woman who has chosen to remain childless, instead devoting unconscionable hours to two careers. On paper, there is plenty to distract us from keeping up the kind of contact we always had growing up. And yet every time Jen reaches out to me, or I to her, I feel like a teenager again in wonderful ways I just can’t experience anywhere else. Case in point: Jen and I attended a book signing for blogger Perez Hilton at Borders two years ago. If this damning evidence doesn’t demonstrate our ability to go tween together, nothing will.

This of course doesn’t mean we can’t share serious emotion. On the contrary, Jen and I have been through a truckload of unimaginable things a deux. The book waits to be written on our childhood experiences, and in the meantime we have cried, yelled and wearily lamented in nonjudgmental companionship. We talk about our marriages, Jen’s kids (who truly do little else but amaze) – everything. It is a true gift to have such a friend, someone I would hang out with any day, without the ties of blood.

I know this will sound unbelievably corny, but when I was senior in high school, and Jen a sophomore, we actually chose to have lunch together, with a smattering of our mutual friends, everyday. Smart ass boys used to call us lesbians as we walked around with our arms around each other. Other, less snarky folks, used to mistake us for twins. In fact this still happens.

On the coldest winter day of early 1996, when the air temperature registered 60 below in Chicago, Jen put on a second pair of pants, and every other layer we could find, to brave the elements with me and get to school. She did not have to do this. In the first place classes had been informally cancelled due to the unbearable weather, and in the second, Jen was not a part of the demanding nerd program that I was, which required me to use school resources no matter the climate. She just wanted to keep me company.

I need not belabor the obvious point. Though we are known to have our occasional differences, which do have the capability of devolving into Jersey Shore-style throw downs (we are merely a couple of guidettes at the end of an angry day), I go to sleep at night knowing that nothing can ever really separate me from my sister. She is the coolest person I know, after myself of course.

She needs to stop watching The Bachelorette, though. For real.