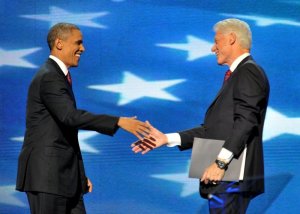 No matter on which side of the ideological spectrum you sit, it’s difficult to avoid political engagement this week. The Republican National Convention, which resulted in the official nomination of the Romney/Ryan ticket, has been followed thus far by the blinding spectacle of the Democratic counterpart. A thought occurred to me last night after the conclusion of Bill Clinton’s return to convention glory, a nomination speech punctuated by a virtuoso display of GOP myth debunking that must have left leaders from the right reaching for the Neosporin.

The thought was this: not only do the 2012 Presidential election and the respective nomination fetes offer a”clear choice” that candidates and pundits love to discuss, but moreover there is a clear dichotomy in the motivations of the two conventions themselves. Simply put, Mitt Romney and his team sought to recast their robotic candidate as a human being with middle class appeal(a goal that arguably fell totally flat). The idea, after a brutal primary season in which the former moderate sold his record as a compromising Governor, for the opportunity to appeal to the dogmatic Tea Party zealots which now represent GOP leadership, was that Mittens hadn’t moved so far to the right that he’d lost touch with regular middle-of-the-road America.

Contrast this with the mission of the DNC. A report from my hometown paper, the Chicago Tribune, shared the results of a Reuters/Ipsos poll yesterday which indicated that the POTUS doesn’t have any trouble with popular appeal. To quote the article, “The online poll showed that voters found Obama more likable than Romney by 50 percent to 30 percent. Forty-one percent said they believed Obama ‘understands people like me,’ while 28 percent said that about Romney.” It’s only natural that voters would tend to gravitate toward a man of modest beginnings, with the power to elicit action and emotion with relatable personal anecdotes and a wondrous oratory gift. It’s almost unfair to place Barack Obama’s considerable magnetism and think-on-his-feet intelligence next to a wooden, scripted man who looks like the enemy from Wall Street and admits to loaded offshore bank accounts. No matter how hard he and his team try to prove otherwise, Mittens is not one of us.

Nevertheless, Barack Obama faced a considerable challenge heading into this week’s events in Charlotte, NC, one faced to a lesser degree by Romney. The President and other scheduled speakers had to re-energize the Democratic base, the disillusioned who voted for “Yes, We Can” in 2008 only to see the slogan perverted into “Yes, We Can…But Only if House Republicans Cooperate.” Over the last four years, hope and optimism have taken many hits in the face of unprecedented Congressional gridlock that seems to worsen with each important issue requiring decisive action.

Though one may disagree with the right on many, many issues, no one doubts the party’s commitment to unseating the President by any means necessary. For reasons ranging from respectful academic disagreement to the worst kind of racial intolerance, there is little doubt that the GOP can anticipate record turnout at the polls this November. However, there is ample reason to suspect that some of the interest groups which carried Obama to victory in 2008 – voters under 25, women, the gay community and the impoverished – may not be motivated to complete their registration applications this round. In addition to disappointment in the Obama agenda’s success already mentioned, nefarious attempts by Republicans to disenfranchise minority groups and the poor have already met with a great deal of prosperity.

Against this backdrop, the primary goal of the DNC must have been abundantly clear to Team Obama: get those 2008 voters, many of whom cast a ballot for the first time, back to their polling centers. See San Antonio Mayor Julian Castro deliver a rousing speech about his immigrant family and the hard work and sacrifice required to make it in America. See Michelle Obama, the most capable First Lady since Hillary Clinton, humanize her cerebral husband with tales of date nights in a rusted out automobile. See Elizabeth Warren’s massive appeal to the 99 percent with a stirring repudiation of the GOP’s obsession with treating corporations better than people.

And last but not least before the current POTUS has the opportunity to address his constituents directly, see former President William Jefferson Clinton bring a convention center and millions of voters to their feet with the answer to all our disillusioned liberal prayers. Bill Clinton is considered a political genius for many reasons but his ability to meld lofty policy discussion with a relatable, folksy charm that doesn’t talk down to Americans…well last night’s speech was simply a master class in connection. All that was wanting was a microphone drop to complete the President Emeritus’ triumph.

I am one of those voters who has occasionally felt letdown by the conflict between the theoretical Obama of 2008 and the practical limits of governing. However if the endgame of this week’s convention is a restoration of enthusiasm, and a renewed commitment to ensuring a second term for the President, then mission accomplished. Whatever the roadblocks of the past four years, the current Commander-in-Chief is the only candidate who cares about the recent decline of the middle class and possesses the policy tools to put it back on the road to success. I’d like to thank Bill Clinton for the impassioned reminder.