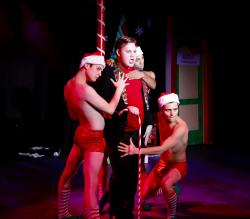 A bawdy piece of holiday fun that also uses laughter to make incisive political observations, “Barney the Elf” is back onstage at the Greenhouse Theater Center. Directed by Tommy Rivera-Vega, who also guided the 2016 incarnation, the colorful show is more than meets the eye and ear. The plot summary, as it were, provides cheeky, consistent cover for a production that has been meticulously updated since its second Obama term debut.

The third annual musical comedy production from Other Theatre is written (and rewritten) by Brian Renaud, with lyrics by Renaud and Emily Schmidt. Press materials broadly describe the work in traditional holiday terms, with a nod to some modern twists: “After Santa Claus retires, his wicked son begins a not-so-jolly reign as the new head of Christmas. The North Pole begins to crumble under his bigoted rule, and Barney the Elf is forced to leave his home for being different from the others…he embarks on a fabulous journey of self-discovery (or is it elf-discovery?) that lands him in one of Chicago’s hottest drag bars.”

That’s a big story to tell in 90 minutes — the production’s running time. “Barney the Elf” moves fast, literally and figuratively, taking the audience on an emotional journey from Barney’s life as a sheltered, one-dimensional holiday spirit through his metamorphosis into a more complex citizen of the world.

The absolute silliness that drives much of the action, song and dance onstage can be taken and left there for theater patrons looking for a bit of joyful escapism. The dialogue is sharp and punctuated with up-to-the-minute pop cultural references. And despite the frightening topical issues addressed in the 2017 script — xeno and homophobia, diplomatic isolationism, income inequality and class warfare — “Barney the Elf” is careful never to take itself too seriously.

It’s quite clear that Santa Junior (played with marvelous gusto by Jaron Bellar) is a fictional stand-in for the mercenary, divisive and unfortunately all-too-real Donald Trump. But those looking for a respite from politics can just as easily locate elements of traditional holiday villains like Ebenezer Scrooge or Mr. Potter, the human humbug of “It’s a Wonderful Life.” Thus, before the first word of banter is uttered, we know how the story ends. We already know who wins. Spoiler alert: it’s not Junior. And that’s a nice serving of theatrical comfort food as the country faces so many issues with uncertain outcomes.

I’ve already highlighted Jaron Bellar’s fantastic turn as Santa Junior. It is not easy playing the villain in a production like this. The temptation to chew scenery and twist the metaphorical mustache can be too much for the most talented actors to resist. But Bellar’s Junior is the man we love to hate, even as we can’t help but admire his trendy red suit, vocal chops and ability to execute a high kick. With much moxie, Bellar brings to mind a young Jim Carrey’s charm, comedic timing and legendary flexibility.

The rest of the cast is more than equal to Bellar. Roy Samra’s Barney is appropriately wide-eyed, rosy cheeked, full of love and hope. Samra is also gifted with a magnificent singing voice. Unfortunately, there were times during Tuesday’s night’s premiere when that beautiful voice was difficult to hear.

An unwise creative decision was rendered to leave the performers unmiked. In the intimate downstairs theater setting of the 2017 production, that may have seemed like a good choice in the rehearsal abstract. However in the presence of a raucous audience — as Tuesday night’s premiere observers certainly were — vocal nuances and dialogue were occasionally lost. There is still time to address this before the show’s December 30 conclusion. I hope that the producers and Rivera-Vega give it some consideration.

Maggie Cain is a wonderful Mrs. Claus, a character who begins the show obeying the voices of men before reasserting her own. This transition is neatly and comically summarized in a send-up of Cee Lo Green’s “Fuck You.” Cain sings it with the dramatic zeal of a North Pole woman with her own complex story to tell.

Rounding out the big four of “Barney the Elf’s” 2017 cast, Dixie Lynn Cartwright brings much more than glamorous, enviable drag to the stage. She also offers a lovely tenor and modulated, dramatic gravity. In the program distributed with my ticket, I learned that Cartwright hosts her own monthly show at Berlin in Boystown. Attendance is on my 2018 artistic priority list.

Other Theatre’s 2017 rendition of its holiday staple deserves space on lists both naughty and nice. “Barney the Elf” is worthwhile and effervescent with hints of social justice awareness. The production proves that being woke can be funny business.

“Barney the Elf” runs through December 30 at The Greenhouse Theater Center, 2257 N Lincoln Avenue, Chicago, IL. For information or tickets, call 773-404-7336 or visit the Other Theatre website.