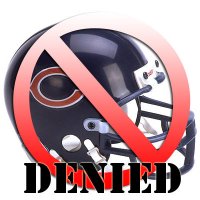 This weekend, the NFL Playoff series gets underway. Although I always enjoy a competitive, well-played match no which team is on the field, there is really only one club whose run I will follow. As a lifelong Chicago resident, I was born and raised to be a citizen of Bears nation.

Da Bears, with their 11-5 record over the course of the season, are fortunate enough to enjoy the week off before they must face the Philadelphia Eagles, New Orleans Saints or Seattle Seahawks at home next week. Fans of my hometown team better hope the organization’s 17-week lucky streak continues, because if so, we will be rewarded with a matchup against Seattle. With a exceptionally mediocre record of 7-9, the Seahawks are the first team to win a playoff berth with a losing tally.

Go Hawks! Because I’ll let you in on a little, poorly kept secret: stellar win ratio aside, the Bears are not a very good team. I have taken a lot of heat from friends and family over repeated insistence that this is so. It is the curse of the righteous to remain unpopular.

Don’t believe me? Watch the tapes of Week 1, when the Bears won against DETRIOT by a hair (granted, the Lions are finally on the upswing) due to the reversal of a last-second touchdown. Otherwise, they collectively stunk up Soldier Field for a full 60 minutes.

But anyone can have a bad week right? Then let’s discuss Week 3, when the Bears narrowly bested the Green Bay Packers, after the Aaron Rodgers-led team managed to set a clubhouse record of 18 penalties. Don’t think the penalties played a role? Rodgers threw for 316 total yards to Jay Cutler’s lackluster 37.

But there’s more. Should I mention Week 14’s pummeling at home by the New England Patriots in the middle of a blizzard? Or perhaps last week’s disgusting season finale, once more against Green Bay, where the Bears appeared to have been replaced by members of the TFL (Tiny Football League).

If all else fails to convince, consider that Jay Cutler, Chicago’s obnoxiously overpaid Quarterback, has been sacked no less than 52 times this season. And before you go feeling sorry for the oft-concussed player, laying the exclusive blame on the Bears’ miserable, porous, offensive line, keep in mind that almost every other QB in the NFL knows to get rid of the ball in 10 seconds or less (an eternity in football time).

But hey, what’s good for Chicago sports is always good for me, and I will be front and center next week, hoping for the best, yet fearing the worst. In fact this season reminds me an awful lot of the 2006-2007 one, when the Bears earned a mystifying trip to the SuperBowl. Once there, Payton Manning and the Indianapolis Colts ran all over us. Just sayin’.