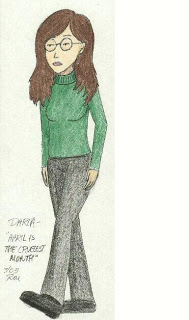 I have been struggling this month my friends. Struggling to write, struggling to exercise. Many days I’m struggling to get out of bed, though insomniac tossing and turning allows no comfort. It’s not exactly a state secret that I war with depression now and again. In addition to emotional ennui’s position as the cliched birthright of the author, it’s been a full frontal assault and I haven’t enough weapons.

The weather is enough to engender a Midwestern Seasonal Affective Disorder pandemic. I saw a Facebook status morning that neatly summed it up, “We’ve having a lovely winter this spring.” Keen observation of the air’s lingering chill aside, it really hasn’t been lovely at all, has it? My fellow Chicagoans will perhaps join me in observing that it isn’t often we can call in “rain” to the office. Yet last week Thursday morning, that’s just what a majority of students and workers were forced to do. Mother Nature assailed us with up to eight inches of precipitation in slightly above 24 hours. I have never seen such a sustained downpour, but I was safe and warm in my apartment. The thousands still grappling with flooded basements and ruined memories are the source of my sorrow.

Then we have the terrorism, ricin letters, explosions and public executions which are becoming the stuff of daily domestic headline. It’s not Tel Aviv in 1984. It’s Boston in 2013 replete with high speed chases, car jackings and robberies. Honestly, I am more comfortable than ever with my decision to remain childless this month. I don’t want to have to explain this broken, deadly partisan and cruel society to anyone. We’re hyperconnected yet increasingly isolated, more mercenary than Gordon Gekko could have imagined. And we’re being led down the rabbit hole by national leaders who cannot pass reforms approved by 90 percent of Americans, laws designed to make purchasing an instrument of death slightly more challenging than obtaining cold medicine

This pungent month does not want to stop at threatening weather and dysfunctional, destructive events that make one assume a whimpering fetal position. Nope. On top of the regular global warming and existential human questions, myself and many of my loved ones have been gifted with disquieting personal challenges. I can say for myself that my romantic partner was injured and rushed to the hospital earlier this week in an industrial accident, which included a total information blackout and mindless race to his side that stopped the world for an hour (mercifully, JC is going to be fine). I’ve undergone tremendous professional upheaval and today, April 25, marks the four-year anniversary of the premature death of my high school mate, Jesika Thompson. My best friend lost an egregiously short 17-day battle with ovarian cancer at the age of 30 and while we share many happy memories, none of us who loved her will ever be the same.

I am not trying to justify my lethargy. It’s there whether I want it or not, and honestly, I’d prefer the distraction of the constant movement to which I’m accustomed. By my mind and spirit are trapped under multi-ton boulders this month and it’s making it hard to breathe.

I realize that the simple transition to May has no direct correlation with the shift in toxic anti-mojo I desperately desire. On behalf of myself and the Newtown families, the Boston bombing victims and their loved ones and everyone else facing an exhausting cluster of defiance this month, the movement of a couple dates promises no release. But let’s try it anyway, shall we?

By any conceivable standard, this has been a grueling month. The term “War on Terror” was given new significance as it became clear that enemy combatants do not exclusively hatch their plots “over there.” In addition to the devastating work of the Brothers Tsarnaev, both longtime U.S. residents (19 year-old Dzhokhar, a citizen) at the Boston Marathon lo these two weeks ago, we have the still-unexplained Texas fertilizer plant explosion and a series of ricin-laced letters mailed to various office holders in Washington.

But the month of April 2013 also presents an argument for the idea that our interpretation of the word “terrorism.” is far too limited. In the wake of Congress’ embarrassing failure to address the growing problem of mass public executions through the passage of a universal background check law for would-be gun owners, eight of our nation’s children continue to be shot and killed everyday. According to a February report from The Washington Post, the U.S. has experienced at least one mass shooting per month since 2009.

Throughout the course of an incredibly violent month, martial law to catch a killer has increasingly become the norm. Boston went on lockdown during the denouement of the hunt for Dzhokar Tsarnaev and today we learned that the business of rural California town, Valley Springs, has come to a halt as law enforcement searches for the killer of an 8 year-old girl. The victim, Leila Fowler, was brutally and randomly stabbed in her home in front of her 12 year-old brother. If such community harassment and intimidation is not the stuff of terrorism, the word has officially lost all meaning.

Compounding the violent challenges facing the nation and the inertia of elected officials in addressing the relative ease of weapon procurement. As well as the mental health and socioeconomic stratification that is surely playing its role, April 2013 has also given the lie to the right wing insistence that climate change is but a liberal conspiracy. Ask citizens of the Midwest bailing themselves out of monsoon-esque flash floods (Chicago) or mid-spring blizzard (Minnesota) if they think global warming is a hoax. Extreme weather has become more frequent, bizarre and devastating (Hurricane Sandy in Manhattan). We don’t need scientific data to confirm this. We can see it for ourselves.

April 2013 has also been marked by the loss of great artists, thinkers and newsmakers.  Adieu Margaret Thatcher, Roger Ebert, Annette Funicello, George Jones, Jonathan Winters and Ritchie Havens, among others. Will inspirational leaders rise up to take their place?

I realize that the simple transition to May has no direct correlation with the shift in toxic anti-mojo I desperately desire for my country. On behalf of myself and the Newtown families, the Boston bombing victims and their loved ones and everyone else facing an exhausting cluster of defiance this month, the movement of a date promises no release. But let’s try it anyway, shall we? Rumors abound that the media and constituent flogging unleashed on members of the House and Senate after the shameful defeat of the gun bill may just cow them into tuning out the NRA and adhering to the will of the 90 percent.

May the plentiful miseries of this month produce some good in the next.