“Directed by Patrizia Acerra, Twice, Thrice, Frice… drops audiences in on the interconnected lives of three suburban Muslim women. Khadija (a terrific Annalise Raziq) is the mother hen/older sister figure to Amira (Catherine Dildilian), an artist and real estate professional, and Samara (Marielle Issa), a young 30-something balancing a career with an MBA program. Samara is also the daughter of Khadija’s deceased bosom friend, investing their relationship with what at first seems like a relatively harmless co-dependency.

Without giving away spoilers, the women’s somewhat predictable lives begin to quickly unravel. The play prophetically opens with an intense debate between the three on the subjects of adultery, polygamy, Sharia law and how all of these forces are shaped by American citizenship and culture. The discussion underpins the plot points to follow, as well as the dynamics between the women.

Amira—childless, happily married but somewhat lonely—initially serves as the rhetorical antagonist to her more culturally conservative friends, rejecting the notion that Muslim men are entitled to sensual gluttony by either gender or divine providence. Khadijah and Samara adopt more traditional positions that are taken apart and reconfigured as the story evolves. Over 100 intermissionless minutes, we learn that perhaps neither Khadijah nor Samara are quite as conventional as first presented. This is a tangled, complicated story of survival, betrayal and moral responsibility—written, directed and acted by talented women aware of their agency.” 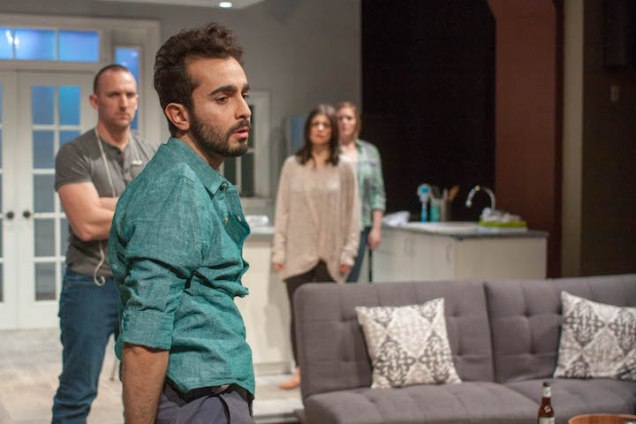 “Somehow in my theatrical wanderings, I’ve never read the script, nor attended a production of Tennessee Williams’ ubiquitous A Streetcar Named Desire. So after seeing Through the Elevated Line, the latest offering from Silk Road Rising, I took to Google to familiarize myself with the material’s themes and plot summary. The world premiere by playwright Novid Parsi bills itself as containing “echoes” of Williams’ work and indeed, Parsi nails the fundamental disagreeability of the three lead characters. I’m not sure what’s in the water cooler within the Chicago theater community, but antiheroes are having a somewhat dominant moment.

In Elevated, the dishonest and self-awareless Blanche DuBois becomes Razi (Salar Ardebili), a slight, openly gay man fleeing unknown hardships and haunted memories to join his sister and her husband in Chicago. The Stella to his Blanche is Soraya (Catherine Dildilian), a budding dermatologist Americanized by her Western education and complicated marriage to Wrigleyville Bro archetype, Chuck (Joshua J. Volkers). Chuck is an odd hybrid of 21st Century social liberalism and toxic maleness that is sort of perfect for the current cultural debate around gender dynamics. Volkers does good work portraying the big, bullying man with repellent hints of sexiness.”

As the curtain descends on Silk Road Rising’s United States premiere of “Wild Boar” it’s hard to escape the suspicion that something has been theatrically lost in translation. The work from acclaimed Hong Kong playwright Candace Chong passed through several notably capable hands before coming to the Silk Road stage. It seems there can be too much of a good thing because ultimately, the production just doesn’t work.

It’s hard not to root for a show that addresses so many urgent issues at once — freedom, censorship, income inequality and sexual dynamics among them. The press packet synopsis describes “Wild Boar” as a “gripping investigation of journalistic integrity, city planning, and social conscience… When a controversial professor goes missing, an editor and his student band together to publicize the truth. Old flames spark and friendships are tested in this intense thriller about media manipulation, fake news, and who gets to speak for the poor.”

Normally, a show’s plot summary doesn’t dive deep enough to expose the production’s shortcomings. “Wild Boar” is an exception. The work is clearly crammed with ideas, including a few left out of the program such as deforestation with a dash of magical realism. There is too much happening for an audience to digest in a meaningful way. Yet, underneath the scattered ideological indictments, there’s not enough character development to lay claims to suspense or thrills. The work lands with a narrative thud.

Where’s the breakdown? As I mentioned, Chong’s work was carried out of the theatrical kitchen by a number of cooks. “Wild Boar” was translated from Chinese to English by Joanna C. Lee and Ken Smith. From there it was adapted by Tony Award winner David Henry Hwang (“M. Butterfly,” “Yellow Face,” “Chinglish”) and directed by Helen Young. That’s four strong narrative voices struggling for control atop Chong’s original script.

As I found myself becoming progressively lost in what the production was attempting to say, I thought several times of the child’s game of Telephone. A message is shared, then distorted through individual consumption and interpretation so that the final result bears little resemblance to intention.

The consequence is that “Wild Boar” looks and feels like a familiar form of social justice propaganda. Upton Sinclair meets Hong Kong’s urban congestion. It is devoid of emotional investment. This is ironic and unfortunate considering the authoritarian ideas and expressions being critiqued. Is the flatness a result of too many ideas or voices, or a function of idiom lost between two wildly disparate languages? I wish I read Chinese so I could look for answers in Chong’s manuscript.

Instead, like most other American audience members, I rely on the artists who touch the material to make it come alive. In the Silk Road Rising incarnation, Chong’s dialogue does not. The only truly interesting, three-dimensional character work is performed by actress Emily Marso (Agent, Karrie, Sunny).

I didn’t even realize until I sat down to peruse the program after the fact that the actress inhabits three different personas. I can’t hazard a guess as to why this is necessary, as it also seems to be for Fin Coe, who plays two different men. I suspect there are thematic ties uniting the shapeshifting, but I don’t know what they are.

At a time when American democracy is feared to be on its own quick slide toward authoritarianism, a land of the one percent abandoning the Constitutional ideals of self-government and equality, liberal theater audiences should be ready for “Wild Boar.” Instead the Silk Road Rising production feels like it’s not quite ready for us.

Silk Road Rising is doing something unique and exciting on the Chicago theater landscape. Per its website, Silk Road “tell[s] stories through primarily Asian American and Middle Eastern American lenses. In representing communities that intersect and overlap, we advance a polycultural worldview.” Although the mission is presented in this way as demographically specific, the company’s quality work appeals to all artistic cohorts.

My last Silk Road experience was back in 2011 with the Chicago premiere of David Hwang’s “Yellow Face.” Part memoir, part fiction, the production was consistent with the company’s brand: stories of relatable American culture intertwined with the global community and world history. To be part of a Silk Road audience is to be entertained — and educated. It’s never a bad thing when good work also leaves one better informed.

I had to view “Ultra American: A Patriot Act,” the one-man show from American Muslim comedian Azhar Usman to learn, for example, that there are less than 16 million Jews on the planet. This seemed impossible, especially to a native of Chicago where Jewish culture is prominent and rich. So I Googled it on the way home. Sure enough, 70 years after the Holocaust, population numbers of the beleaguered people have yet to regain pre-World War II levels.

I should have wept over this revelation but I was too busy laughing at Usman’s description of growing up in Skokie, attending so many bar mitzvahs that he became jealous of the “chosen” people. The man labeled “America’s Funniest Muslim” by CNN also manages to turn a life spent profiled by airport security and fellow passengers into a laugh riot.

“Ultra American” is “good, but not great,” as my companion for the evening accurately put it. But the periodic giggles and opportunity to understand how Muslims grapple with the double consciousness forced upon U.S. people of color? Well worth the reasonable $25 ticket price.

What keeps the production from being great is a phenomenon that Usman focuses upon at the end of his 80-minute set: “projection.” While sharing gallows humor vignettes about the life of a traveling comedian who matches the physical stereotype of a terrorist, Usman concludes that everyone’s story involves projecting our attitudes, prejudices and experiences on another. It’s a solid philosophical point.

The problem comes early in the show when the performer levels some tough accusations at white Middle America, which frankly he must. After all, this is the year in which Donald Trump rose to become the alt right, hate-filled standard bearer of the Republican Party. This did not occur overnight or in a vacuum and Usman could not reasonably be expected to avoid racism. It would be a dereliction of duty.

What’s interesting however is the number of times he directly addresses white audience members and tells them to “relax” or “laugh,” claiming to feel rising tension in the room. Ironically, this is an act of projection that reveals the performer’s own biases. It is he who appears to be uncomfortable indicting certain segments of Caucasian culture, when it must be clear that bigots of any kind are unlikely to purchase a ticket to his show. Moments of genuine community laughter were sometimes met with an abrupt end by a weird strain of defensiveness.

As the production runs through September 25, there is still time for Usman to refine his approach. Don’t anticipate controversy for the audience. Trust them to get there on their own, and laugh at the absurdity of it all.