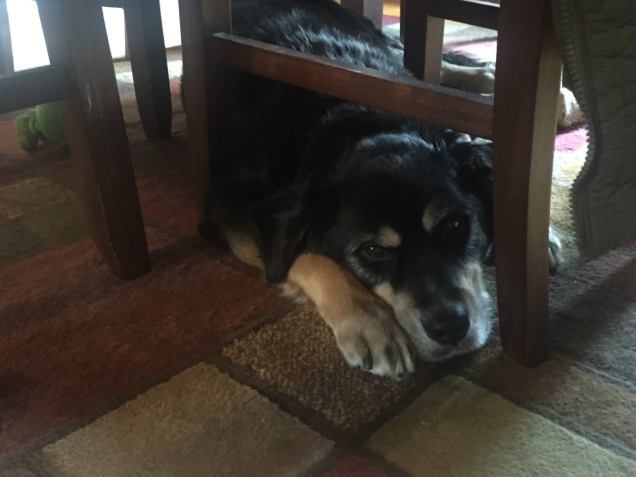 In February, Bob and I were dealt a cruel karmic slap with the loss of two of our three pets in just a few weeks. The concurrent deaths of Dino, the 16 year-old fluffy kitty and Meko, 80 pounds of Rottweiler warrior princess, ripped a hole through our home and our hearts. Wounds from which we’re still recovering.

I can admit now, with some degree of shame, that my own grief had a few additional layers. I’m a caretaker at heart. And Dino and Meko were notoriously needy – Deans with his numerous food and body temperature issues, Meeks destroying the kitchen, bathroom and/or laundry room at the first hint of a thunder storm. She was also truculent at best with other dogs, her attitude not affected whatsoever by the arthritic hips that made her unlikely to win a fight. She just didn’t give a shit. I miss my girl.

The dual loss of those two complex fur babies left a pragmatic vacuum in my world. On his worst day, Bob is more capable than most people. He’s the one who makes things work and keeps them running. In return I silently move the empty beer bottles to the recycling bin and clean the lint trap in the dryer. And while I always loved all three of our pets equally, it took a long time to discover what use, if any, Jude had for me. Bob and the cuddly, drooly Australian shepherd have been together for eight years. They have their routines and language. Bob, the standard bearer for reserve, shoots beams of puppy love from his inner core directly at Jude. It’s the warmest, most adorable light. But it was hard at that time not to feel like an interloper, an intruder into a perfect dynamic.

These feelings became increasingly painful as I struggled with newfound time – time no longer spent cajoling Dino to eat more or playing defense between Meko and every other canine walking the neighborhood. I resented Jude for the change. Throughout his own mourning process, Bob moved closer to Jude, with the confused, lonely dog reciprocating. And I was bitter. I missed my babies and the only one left had a perfect union with my partner from which I felt estranged. Why was he the one that lived?

With the benefit of time and perspective, it’s horrifying to confront the shape into which I allowed grief to contort me, however temporarily. After several weeks of uneven sleep and a waking gnashing of teeth, a simple idea occurred. Perhaps I could actually try getting to know Jude. True we’d been living together in the same menagerie for eight months, but I suddenly saw that I never gave him much thought. In part because of high maintenance devotion to Dino and Meko, and also yes, because of the perfect circle that Bob and Jude formed without me. If my nature is that of a caretaker, it’s also sharing space with an insidious pride. Missing love for fear of rejection.

Once I realized it was stubborn foolishness preventing a closer relationship with Jude, I made an effort to be more hands-on. Yes, he and Bob have their routines but we can have our own. I concede that initial attempts were infused with sad wistfulness. But with dedicated repetition, Jude and I finally got acquainted. The knowledge and understanding is reciprocal. He learned that I don’t like to be leapt upon at walk and dinner times like Daddy does. I figured out that a certain high-pitched whine means a digestive bomb is about to explode. But I still have time to open the back door because Jude hates having accidents in the house. Minus the dog hair and drool, my pup can be kind of fastidious. He is every bit as complex as his siblings were. I just had to look.

There are activities in which I can engage Jude that were not possible with Dino or Meko. Like taking long walks, sometimes three or four miles weaving through the neighborhood streets that are my past, present and future. On Mother’s Day, I awoke in tears, missing my pets more acutely while indulging in an annual bout of self-pity. It’s been well-documented that my own mother’s love was withheld. But it was a beautiful Chicago day and I wanted to treat myself to a positive experience. I decided to take Jude on a trek to see the only apartment building where I remember living a happy, healthy life with my immediate family.

As we made our way to the corner of Byron and Leavitt in North Center, I saw that what had very recently been a solid, well-cared for brick edifice, was now a huge empty lot. For sale. Sun shining, 80s tunes blaring through my headphones, I wanted to sit down and weep. The positive memories of my childhood were literally a crater. But I couldn’t indulge the impulse. I had Jude with me. Instead I leaned forward on the construction fence and placed my forehead on the metal plate, as if to absorb the good times from the vacant ground by osmosis. Jude sat on my feet with his hairy warmth. It was calming. Exactly the anchor needed in an out of control moment.

Our walks are now a regular feature – my activity with Jude. We wander through parks and I let him drink water from my cupped hands. I know to avoid food wrappers and garbage cans as if they are landmines. My spoiled doggie is still a rescue pup at his core. If it has aluminum foil, he’ll eat first and ask questions later. He knows I like a brisk pace and thus he rarely pulls me toward others strolling with their own pets (though we both know he’s dying to sniff their rears). He’s not just Bob’s dog anymore. There was always room for three in the circle. I just had to let myself join.

2 thoughts on “Remember to Let Him Into Your Heart”