Ok, not all of these stories have flown completely under the radar, but Trump and his shit show tend to consume everything in their path. Let’s remind ourselves that other stuff actually did occur this week….

The Giuliani crazy train continues to roll through America. While much of the nation has been focused upon Donald Trump and allegations of sexual misconduct, Giuliani doubled down on his own warped hallucinations, claiming Hillary Clinton lied about being in New York during the 9-11 terrorist attacks and their aftermath. One problem: there’s a photograph of Giuliani walking right next to Clinton through the streets of Manhattan during that period. I can guarantee that the Trumpsters who believe everything they hear from campaign surrogates will accept this bald-faced lie as fact, and therein lies the danger. As soon as a claim is made, no matter how insane, it’s set in stone and repeated ad nauseum. It’s a relentless task but it’s incumbent on the media (and bloggers) to continue to counter the outrageous, with the hope that reality seeps into the consciousness of the public majority.

Trebek has been hosting Jeopardy! for more than three decades, and apparently he’s weary of maintaining his long-standing image as a dignified smarty pants. On an episode of the game show that aired this past Wednesday, Trebek called one of the contestants a “loser” during the requisite “get to know you” segment. Susan Cole mentioned her love of “nerdcore hip-hop” and his response was anything but kind and tolerant.

Answer: This cultural icon behaved like a judgmental ass on one of the nation’s longest-running intellectual competition programs.

Question; Who the hell is Alex Trebek?

Yep. This week, singer-songwriter Bob Dylan was awarded the Nobel Prize for literature for “having created new poetic expressions within the great American song tradition,” according to the judging panel.

Confession for which I risk Internet pile-on: I’ve always felt that Dylan is a matter of taste that doesn’t suit my palette. But I’ve enjoyed covers of his songs from other artists (Jimi Hendrix’s “All Along the Watchtower” for example). I suppose this supports his award. I don’t personally enjoy Dylan’s style or delivery, but other renderings of his work allow the messages to touch me. Congrats Bob. 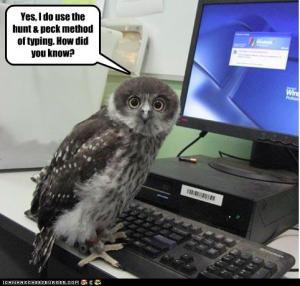 When I think about it, there’s really no good excuse for my condition. I went through primary school in the 1980s, when American culture exploded in its contemplation of the personal computer’s applications. There was no concept of the Internet when I entered kindergarten in 1983, but I had a fair amount of exposure to the PC in those years: a glorified word processor at home, archaic computer game play with my friends (Jeopardy! The Oregon Trail!) and lessons in basic DOS as a part of grammar school curriculum.

And yet somehow, I never learned to type. Oh I am typing now, and obviously I get by. What I mean is that I am incapable of doing so the “right” way. After 25 years of loquacious communications, I have a confession to make: I am a hunt and pecker.

Mind you, and I don’t like to brag, but I am the quickest draw there is. I may look down at the keyboard whilst I produce words, but my fingers fly over the numbers and letters like a concert pianist. The only real problem to this point has been the noise. I drill the keyboard like I am in the middle of a World War II blitzkrieg, typing out a potentially life saving SOS message, but when you work around me, it quickly becomes common white noise. I have survived 21 years of formal education (including a Master’s in English Literature), 11 years in the corporate/nonprofit world and two years as a freelance writer and blogger. I can interview subjects with a phone expertly balanced between my ear and my shoulder while I type furiously.

This never bothered me before. It was one of my charming idiosyncrasies, or so I liked to believe. Anyone can type correctly. How boring.

I was completely unselfconscious about my quirk until yesterday, the first day on the job at a small publishing firm. Anyone who has checked in with me the last four months knows all about my unemployment saga, the self-flagellation I publicly engaged in over fear that I would never work with my words, that I had chosen my life’s dream rather poorly, that I was condemned to a life of thankless freelance hustling (emphasis on the “free”). Well through a mixture of networking, patience (?) and highly practiced interviewing, I finally secured a full-time web writer and editor position with a highly respected financial guru. There’s so much to learn as I remain a relative newbie to the journalism/publishing worlds, but I have finally have my shot.

I showed up Day 1 determined to impress. There are so many diverse and demanding projects into which I will eventually sink my teeth. The new boss made it clear that a three month learning curve is expected, but I will do all I can to ensure that timeline is shortened. I can’t endure feeling out of my element for that long. I was ready to be confused, overwhelmed, possibly even a little panicked. What I was not prepared for was a sharp indictment of my sub-par typing abilities.

The new boss stood over my shoulder while I formatted a press release, an experience inherently designed to create discomfort, and her words took me completely off guard: “We are going to have to do something about your typing. There are plenty of classes and online tutorials.”

Slightly stunned and embarrassed, I began to protest that my unorthodox style had served me well to this point, but I was shut down immediately with a challenge: “Well we can do a test. If you can produce 150 words per minute, I’m good.”

I politely declined and it seems therefore that I will have to learn the proper method of word processing. I am the proverbial old dog tasked to learn a new trick. I expected many, many deficiencies to show themselves in this training period and usually do a terrific job of cataloguing anticipated flaws before they can be pointed out. I do not want this stupid issue to stand between me and publishing success